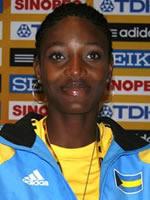 Sort By:
Filter By:

To see all performances, subscribe to start your free seven day trial

01:33
Shaunae Miller wins the Millrose 300m days after getting married

Play
Shaunae Miller with a full workload at the Olympics

Road To Rio: Last Pure Athletics Workout Before Games...
The Adidas based Pure Athletics Training Group in Clermont, Florida boasts nearly a dozen Olympians in Rio De Janeiro, Brazil. We caught up with the group before they left for one of their last workou...

Road To Rio: Watch All Olympic Pre-Meet Interviews...
Central Florida serves as a training ground for dozens of elite track and field athletes, many who will be competing over the next two weeks in Rio at the Olympic Games. Our Zack Bias made a trip to ...

Georgia Sweeps DI National Athlete of the Week Awards...
The University of Georgia made a clean sweep of Division I and student-athletes from all divisions made impressive gains on their all-time division record books in this week’s U.S. Track & Field and...

D’Agostino, Coburn & Miller Added to Post-Indoor The ...
With the indoor collegiate season now in the books, the Bowerman Watch List Committee released Thursday its post-indoor women’s Watch List for The Bowerman that includes a new collegiate record-hold...