A day-by-day wrap-up of all the Bahamian athletes competing in London. The Bahamas took it to the line with the United States--and prevailed! The times were identical at 2:58.87--the fastest times ever ran in the first round at the Olympics--but Bahamas had a slight edge in the photo finish for the top seed going into the finals.

The BAAA was not taking any chances this year and rean the "A Team" with Ramon Miller, Demetrius Pinder, Michael Mathieu, and Chris Brown doing an excellent job.

Leevan "Superman" Sands took fifth place in the finals with a 17.19 meter leap. He only manged to get off two legal jumps, but improved by .02 from the prelims.

Leevan "Superman" Sands advanced to the finals with a 17.17 meter triple jump in the morning session, out of Group B. He only took one jump and then passed on the next two to save himself. That one jump was more than good enough. He will be the second seed into the finals, which will take place on Friday.

Sands was happy and said he achieved his goal, which was to qualify on one jump.

“That was our strategy,” said the elder Sands about his son’s performance. “I told him to try and qualify on his first jump and put the pressure on everybody else. Then we can relax and get ready to unleash the beast in the final."

In the final, Sands said he's going to change Nassau and "Unleash the Beast." Shamar Sands was doing well in heat three of the the 110s. He was leading the heat after five hurdles when he stumbled over the sixth and hit the ground. The Bahamian star was DQed did will not advance.

18-year-old sensation Anthonique Strachan ran for fifth place in heat one with a 22.82 in the morning semi-finals. It was not quite enough to make the finals, which would have needed a 22.56.

“I didn’t get the start that I wanted, as good as yesterday (in the heats),” Strachan said. “To me, it was good because I still gained the experience and that is something nobody can take away from me. I’m really not upset with not making the final because making the Olympics alone is one of the greatest experience that I will ever make in my track career."

Michael Mathieu did well in finishing third heat three to make the auto-qualification. He ran a 20.62.

In heat seven, Terovrvano Mackey was not able to move on. He finished seventh in 21.28.

Bianca Stuart was not able to advance to the finals. She finished tenth in Group A with a 6.23 meter long jump into a -1.9 negative wind.

“It was very bad. It wasn’t what I expected. I really don’t know what happened out there,” said Stuart after her performance. “I was doing good in the warm ups, then on my first jump, my foot buckled at the board and I wasn’t able to control it. After that, I tried to come aggressive again. I was on the board, but I wasn’t going anywhere.”

Demetrius Pinder and Chris Brown both ran well in the finals, but finished outside the medals. Pinder got off to a very strong start and looked in good position to challenge for gold through about 200 meters, before he started to fall off pace. Brown took his time a little more and came on strong down the homestretch, but couldn't quite match the kick of the top three. Fireman finished in fourth place 44.79, with Pinder in seventh with a 44.98.

The story of the day and certainly one that has all of the Caribbean buzzing is that of 19-year-old Kirani Brown of Grenada, who won the island nation's first ever Olympic medal. He was untouchable down the last 100 meters and finished gold with a 43.94--the first non-American to ever break 44 seconds. Not only that, but the Caribbean swept the medals in the event--without even involving Jamaica--with James, Lugelin Santos (Dominica, 44.46) and Lalonde Gordon (Trinidad and Tobago, 44.52).

Anthonique Strachan... future star? Or current superstar? That will be decided tomorrow when we she if she makes the finals. But the present is certainly looking pretty bright for the 18-year-old. Despite the fact that Ato Boldon couldn't pronounce her name right on the American broadcast on NBC, she sailed in just in 100-meter champ Shelly-Ann Fraser-Pryce's shadow. The Nassau native ran a 22.75 with what looked like putting on the brake a bit the last 15 meters or so. We'll see what she can do... and hopefully she'll make Ato learn her name!!

The legend, Debbie Ferguson-McKenzie, didn't get the result she was hoping for... she failed to advance for the second time (also in the 100) this Games. She looked solid and in contention with the top three who auto-advance until about the last 40 or 50 meters when her legs tied up a little and couldn't quite respond fast enough. She finished with a respectable 23.49 for seventh place in the heat. We will still get to see her one last time in the Olympics in the 4x100. GO DEBBIE!

Ivanique Kemp lived to race another day! She made the semis with a third place finish in heat two. She'll probably need to improve her 13.51 to around a 12.8 if she hopes to make the finals.

Derrick Atkins had a great race, but the times today were just sick with the winners in all three heats going 9.8x.  Atkins put up a season best time of 10.08 for fourth in heat three. It was not quite enough though, the last slot in the finals was 10.02.

In heat one, Demetrius Pinder sailed into the finals with a 44.94 that looked like auto-pilot to me--at least on my smartphone's little screen--for second in the heat. Chris "Fireman" Brown put his foot on the gas a little harder trying to track down Kirani James of Grenada. He finished in a season best 44.67.

Ramon Miller put up a nic etime, but it wasn't quite enough to move on. He was two slots out of the qualifying time after finishing in fourth place 45.11 in heat three.

Things are looking real good for The Bahamas going into the finals and beyond that to the 4x400. The hopes were already set on that gold medal, the island eyes got a lot little wider after Lashawn Merritt of the US went down with an injury, and in today's 400 semis the US looked even more vulnerable when they failed to advance anyone to the finals. The USA has the advantage of some depth with the additional of former 400m Olympic champ Jeremy Wariner and Angelo Taylor and Kerron Clemente from the 400 Hurdles... but this year The Bahamas is looking good as ever and US is showing at least some signs of weakness. It could be the year if all goes just right and the right lineup is put in!

As good as things looked in the 400, things did not go so well in the high jump. Both Donald Thomas and Trevor Barry failed to advance to the final round. Thomas cleared the opening height of 2.16m after two attempts, but could not get over another to tie for 14th place in Group A. Barry had a great start clearing 2.16 and 2.21 on his first attempts, but then failed to get on top of the 2.26m. that put him tied for eight place in Group B and just one slot from the finals cut.

All three Bahamians advanced to the semis! Demetrius Pinder and Chris "Fireman" Brown each won their respective heats. Pinder easily took heat four with a 44.92 and Brown edged out Tony McQuay of the University of Florida 45.40 to 45.48 to win heat five. Ramon Miller also advanced by taking second in heat two with a time of 45.57. They will compete in the semis tomorrow.

Derrick Atkins ran a controlled-looking 10.22 to take second in his heat two behind American medal-favorite Justin Gatlin's 9.97. He advances to the semi-final round tomorrow. Warren Fraser couldn't quite get there, missing the time-based qualifying mark by three slots, with a fourth place 10.27 out of heat seven.

Sheniqua Ferguson ended her nice 2012 Games run individually with a slightly better time than Friday. She finished in seventh place in heat two with an 11.32. 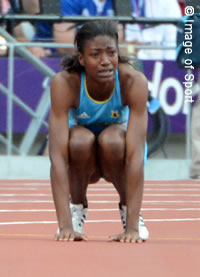 University of Georgia freshman Shaunae Miller had her Olympic debut cut to an early start. After starting heat two of the prelims, she pulled up after about 100 meters with an injury and could not finish the race. It as a disappointing start, of course, for the young Bahamian starlet, but in the grand scheme of things (as one of the youngest track Olympians in the field)  she's got a lot of potential Olympic glory yet ahead of her. Great season, Shaunae! Raymond Higgs flying high in the triple jump qualifying round on August 3.   Photo by Image of Sport

Despite a solid second jump of 7.76 meters, that was the only legal jump Raymond Higgs was able to put forward. It was not quite enough to get him to the finals.

Sheniqua Ferguson moved on to the semi-finals with a strong 11.35 effort for third place out of heat two. This was a really great showing for Ferguson in her individual Olympic debut.

Unfortunately, Debbie Ferguson-McKenzie, the three-time Olympic medalist from the Bahamas, failed to advance to the semis after running a fifth place 11.32 in a tough heat six. The time was off her season best and it is a bit of a downer in a long Olympic career that started back in the Atlanta Games in 1996 and has seen her in every Games since. She will still compete in the 200 and 4x100 relay where The Bahamas hopes to earn another medal, as they did in 1996 and 2000. She won bronze individuall in the 200 meters in Athletics Games 2004.