St. Augustine's alum and Seton Hall Univeristy runner Hughnique Rolle is the top distance runner in The Bahamas. She holds multiple national records and a shelf full medals from BAAA Nationals and CARIFTA. She talks about her career, her future, the future of distance running in the islands, and gives some advice to young runners.

MileSplit:
Distance running is not very popular in The Bahamas. How did you get started and what made you decide to pursue it over sprints?
Hughnique:
Well first it started when I went to high shool, I was always tall and lean and they thought I would be a great 800m runner (they meaning the coaches at my high school St. Augustine's College). And so I started to do a lot of interschool meets and also ran the 1500m too. And it turned out I was somewhat good in it. Eventually I ended up in a club, T- Bird Flyers, and I started running more competitively a lot of times though I ended up running by myself or with about two competitiors. 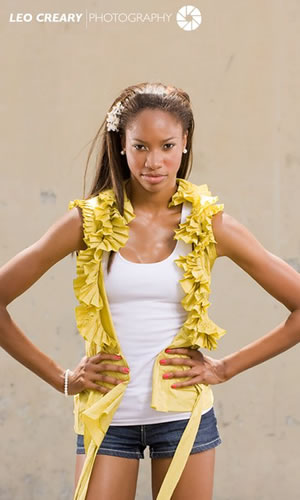 Besides her running, 19-year-old Hughnique is an aspiring model and at six-feet tall has the height of a supermodel. Perhaps she has a bright future in both realms!

I always kept focus, however, and knew I could go further if I tried. I kept on winning races and breaking little records back home and eventually they gave me a chance to go to CARIFTA to represent them. And the second time I attended CARIFTA I ended up winning a bronze medal in the 800m. Since then I medalled every year and started to qualify for even bigger meets. In 2009 I went to CARIFTA, and I broke the 1500m national record here. Since then I've broken that twice and also set the 3000m record over twice.
I decided to pursue it because I was always one for change. I always thought it was nice that people sprinted, but it would be even better if we could produce distance runners and since I was good alot of people encouraged me to especially my parents. I have a passion for distance running and I just enjoy doing it and I just want to take it as far as I possibly can and with me doing that I hope to encourage more and more kids to get into distance running this year my last year as a junior at CARIFTA I was able to become the first Bahamian in history to ever medal in two distance events at an international meet when I won the gold in the 3000m something that has never happened and a bronze in the 1500m. Both times I bettered my national records it was and always will be hard to run distance in The Bahamas right now since there is not much competition, but I just want that to change for the future. Also I do road racing too and that world also got me into more and more distance running.
MileSplit:
Was it the CARIFTA Games that helped get you the attention of the coaches of Seton Hall? Or how did you end up running for the Pirates?
Hughnique:
Yes, it was a mix. He said he saw me from I was in grade 10, but you know they can't approach you until you're a senior so it was a mix of both.
MileSplit:
It seems like maybe there is getting to be a little more momentum and interest in cross country in the islands beyond just cross-training for sprinters. They've started the new high school series and then the national championship is coming up this weekend. Are you hopeful and seeing signs of Bahamians being able to step it up in those events and see success on the world stage like the country's had in the 100, 200, 400, TJ, etc?
Hughnique:
Yes, I do see it happening, but more in the future. We are not quite there as a whole as country, but they are now making the effort to get there which is good so I think in some years to come eventually we will be able to have a huge prescence on races that are longer than just the 400m.
MileSplit:
What are some of your goals for your last two seasons at Seton Hall? And beyond the NCAA season? Do you think you'll keep running and do you have any aspirations of trying to make the Olympic standard for 2016?
Hughnique:
Yes, beyond it I will continue that's my hopes because I still represent The Bahamas. I'm now just going to turn 20 next year so I'm goin onto the senior level. Last year I qualified for Senior CACs in Puerto Rico, so I got a little taste, but YES my goal is to make the standard in 2016 and just to keep doing my best and going as high as I possibly can.
MileSplit:
Thanks so much! Last question, do you have any advice for young girls who look up to you and want to strive maybe to break your records in a few years? (haha!)
Hughnique:
Hahahahahha... Well, I encourage them to try! hahahah And just to go out there and dare to be different and don't be afraid too. I mean I ran with boys haha and I encourage them to break my records and to go for it. hahhahaha