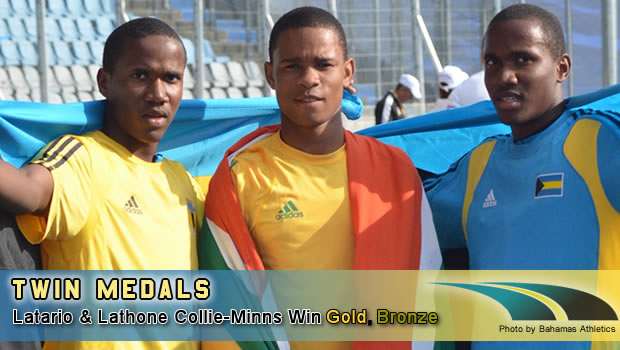 Other Bahamas Results from Day Four

Lille, France - For most of the Boys’ Triple Jump final tonight it looked as though for the first time in the history of athletics twin brothers would clinch gold and silver in the same competition!


Indeed, Latario and Lathone Collie-Minns who had respectively won Group A and B in yesterday’s qualification rounds found themselves in the lead at the end of round 2.


The World Youth leader at 16.55 Latario opened with a massive 16.06 to secure gold with his very first jump. In fact the Bahamian didn’t look a bit concerned about the outcome and why would he; no other youth athlete had gone beyond 15.80 this year let alone broken the 16 metres barrier.


His brother Lathone meanwhile backed his opening 15.12 with a second round 15.51 which placed him securely in silver medal position.


The French supporters had also something to be pleased with as their own Jean-Noël Cretinoir was holding on to the bronze medal position with his opening 15.37 which he further improved to 15.39 in the third round.


Not only do twins look alike, they often act the same and both Latario and Lathone decided to pass their third round, they both fouled their fourth and then passed again their fifth.


The tactic may have paid off for Latario whose 16.06 remained unchallenged and secured the Bahamas’ second gold medal of the championships after Shaunae Miller’s 400m gold yesterday.


However, it was South Africa’s Albert Janki who was in fifth position before his sixth attempt who completely shook the standings with his final step, hop and jump. Aided by a 2.6m/s tail wind, Janki landed at 15.95 (his personal best standing at 15.50) to secure a surprise silver medal.


Lathone responded but his last round effort 15.43 would not be good enough as the brothers were eventually split into gold and bronze medal position.


Russia’s Maksin Lustin also concluded well his fifth round effort 15.45 leaving him fourth just ahead of Cretinoir in fifth.