Photos courtesy of the BAAA 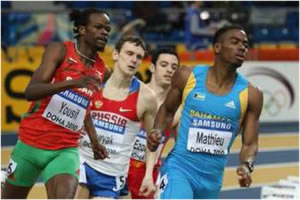 Michael Mathieu waited patiently by the phone for a call that never came. The Bahamian star was waiting for his chance to represent the islands in the 2004 Olympics. The Association told him to keep training because they may need him, but the Athens Games came and went without the up-and-coming sprinter from Freeport.

"In 2004 I was running extremely well to make the Olympic team, but then I pulled my quad muscle right around the Bahamian Nationals and couldn't run. They decided they weren't going to take me so I had to wait. My mom died that year in April and I didn't make the team so all that just made me depressed, but I eventually had to pick myself back up."

Mathieu enrolled at Southwest Christian College in Terrell, Texas. It was there he picked up the pieces and made a name for himself. He earned All-American honors in the indoor 400 meters and outdoor 4x100 and 4x400 meter relays. In 2004, he was the JUCO Indoor National Champion in the quarter mile.

That success landed Mathieu six hours west of Terrell in Lubbock, Texas at Texas Tech University, which he called home from 2005-2006. Over those two years he was awarded All-American honors for the 2005 indoor and outdoor seasons as well as the 2006 indoor season. In the 2005 outdoor season he helped the Red Raiders 4x400 relay team to a 7th place finish at the NCAA Championships and a school record time of 3:01.69 set in the prelims. In 2006, he placed fourth at the Big 12 Championships in the 200 meters with a personal best time of 21.34.

He earned his degree and graduated from Texas Tech in 2007. During that year he says he was basically training on his own.

"I won a Pre-World Championships Meet in Osaka and ran a personal best 45.2 in the 400. That's when agents came to me, and the following year I had a little deal with Adidas." 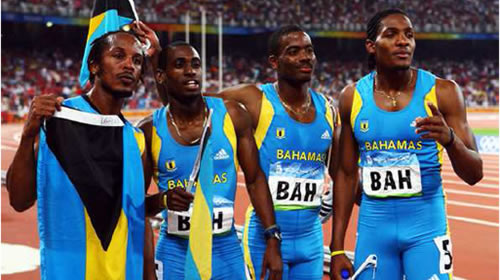 In 2008, his Olympic dreams finally came to fruition. The hard work finally paid off: he had his chance to represent the Bahamas on the biggest stage.

"That was my first Olympic team. I got to run the open 400 and 4x400. I went there with the mindset that I had to come back with a medal. I ran a personal best in the 400 (45.17) and came back and split 44.05 on the second leg of our 4x400 that won the silver medal. It was a dream come true for me. Hopefully we can do it again in London, but I know the Bahamas were impressed with us and we represented well."

Recently, Mathieu has been testing his talents on the European circuit. Since he doesn't currently have an agent or manager, the meets have been rather small. However, that hasn't stopped the 27-year-old from having a successful season.

"So far it's been going well. I lost my last race in Strasburg to Jonathan Borlee (former Florida State sprinter) who ran 45.04, but I managed to pull out a season best 45.54. That was my sixth of six competitions in Europe so I was ready to come back."

The main factor Mathieu is adjusting to is the heat. He moved to Orlando last September and is training for the upcoming Bahamian Nationals.

"In Europe it wasn't as hot as this so it takes a little time to get used to it again. I'm training on my own in Orlando right now and it's been coming along pretty good. Right now I'm doing more speed endurance and speed work because I feel my strength is there. Monday, I did 2x200 with 30 seconds rest in the flats then took ten minutes and did an all out 200 in the flats."

Mathieu believes the competition this weekend will be more stacked than what he has seen in Europe because "we have some of the top quarter-milers in the world." The Freeport-born star plans on running the 200, 4x400, and is contemplating the open 400. He says it is an honor to have Nationals in his hometown.

"Well, it's been years since it was hosted here. Now we have a new Mondo track and Freeport has produced some world class athletes. I think it's good to make a change (from Nassau) this year. It's a new environment and I'm sure it will bring revenue for athletic federation. It should be really exciting to watch this event. It's being promoted well and I'm sure the crowd will be great!"

Running in front of friends and family Mathieu knows the pressure that is riding on this race. He also knows that if he stays focused he can make big waves on the island.

"I'm trying to stay calm. I know the fans will be cheering for their hometown boys, but I can't let that get to me because it could cause a negative effect. I just have to focus on preparation and execution. I'm trying to gear up my body to be the first Bahamian to go under 20 seconds in the 200. If not, a national record and the win would be good enough."

"I would love to be the first Bahamian to go 19 (200 meters) or 43 (400 meters) and get an individual medal at the World Championships and at the Olympics."

As for a chance of reuniting with Chris Brown, Andretti Bain and Andre Williams at a chance for 4x4 gold, Mathieu says it's not likely.

"We all train in different locations, but I do talk with them frequently. As for the same team in London... I wish we could, but the way things are going with new faces like Demetrius Pinder and Latoy Williams, I'm sure their goal is to get rid of us and make a name for themselves!"

That level of talent says a lot for the future of the country.

"The Bahamas is definitely rising in competition. I believe when the younger generation sees us out there doing great things like medaling at the Olympics they become encouraged and believe that they can do it as well. So with that is the offset of great athletes just as Usain Bolt did for Jamaica."